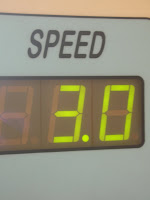 Mile Marker 30:
After walking 30 miles, I thought I should celebrate big.  That I should come up with some deep thoughts about the accident and how far I’ve come.  But that task became too overwhelming, especially last night at bedtime.
It turns out there are some things I’m not quite ready to talk about yet.
So I decided to get “Back to Basics.”   Actually, BACK TO BACON.
Bacon’s a great way to celebrate my 30th mile.  Here’s why:  Bacon reminds me of so many tiny, pleasurable, and funny moments during my recovery.
In the hospital, I didn’t have much of an appetite.  And the huge bags of antibiotics coursing through my IV made food taste metallic.  When my meal tray was delivered, I’d taste each item and then push it away.  My mom would take a forkful.  “It tastes fine!” she said.  No matter.  Even foods I loved – turkey, pasta, Starbucks Frappaccinos – tasted strange.
One morning, I was sitting in my chair, near the doorway of my room.  A cart of breakfast trays passed by in the hall.  An aroma wafted in.
My across-the-hall neighbor had ordered BACON.
Bacon was never really something I liked.  But it smelled so good that, the next day, I ordered it too.  And the next.  And the next.  The streak was on.  Every day, bacon became my staple.  It was the only food I’d eat on my breakfast tray, and sometimes all day.
In the morning, when my surgeon Dr. K stopped by, he’d jokingly lift off the plastic cover from my breakfast plate, sneaking a peek to see if I’d finished my bacon.  I always had.
Bacon wasn’t readily available at night, so I expanded to pepperoni.  My brother Mark braved the snow to bring me late-night pizza slices from outside the hospital.  He was a pizza and bacon-cheeseburger fan himself, so he proudly announced that he'd converted me to his world of fast food.   He started bringing me hash browns from Dunkin Donuts.  They went well with bacon.  I'd joined him on the dark side.
Why bacon?
Maybe my body craved the salt, the fat, or the protein.  My Uncle Steve (who's also a doctor) came up with an unlikely theory that became my favorite.  While I was having a blood transfusion one day, he noticed the blood donation had come from a Wisconsin blood bank.  Altogether I’d received 19 units of blood.    He said I was like a new person on the inside – maybe one who was farm-fed.  Maybe my new blood cells craved bacon from the country’s heartland!

When I was discharged, I stuck with bacon for quite a while.  I needed to gain weight and it seemed like the perfect way to do it.  During our many IHOP nights, my parents and I dined on bacon and eggs.  My friend Sue and I discovered a great salmon BLT at lunch one day.  My Aunt Gail bought me a zany calendar full of fun facts and quotes about bacon.  I started thinking like Homer Simpson.  Greasy and thin or crunchy and thick, bacon tasted great. 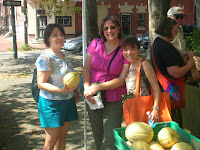 Now, 8 months later, I’m weaning myself off.   The salt adds to the swelling in both my legs.  I’m trying to get back to my old, healthier eating habits.  Perhaps my own blood cells are taking over.
Yesterday, I fed the old and the new me.  In the morning, I walked three blocks to the local farmer’s market with Jen and Mary.  We bought lots of fresh veggies, and even found honey made from bees that live in my zip code! 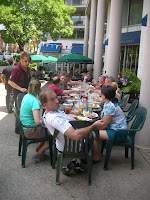 But later in the day, I brunched with a big group of skater friends at Little Pete’s.   I ordered sensible eggs and toast, but I was lucky enough to sit next to my bud Bosco, who ordered pancakes and BACON.   She gave me a free sample.  Mmmm.  That bacon was thick and crunchy! 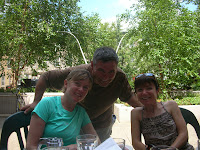 So as I mark Mile 30.  Here’s to going Back to Basics, or BACON.
I’ll figure out the hard stuff eventually, but for now, I’ve decided comfort food is the way to go.
Mileage so far:  30.79
It seems a little unfitting that my mileage picture (at top) was taken today on the treadmill at PT!  But special thanks to my therapist Colleen, who snapped it while I was walking.  I tried taking a few but they all came out blurry!
Posted by Rebecca at 4:06:00 PM 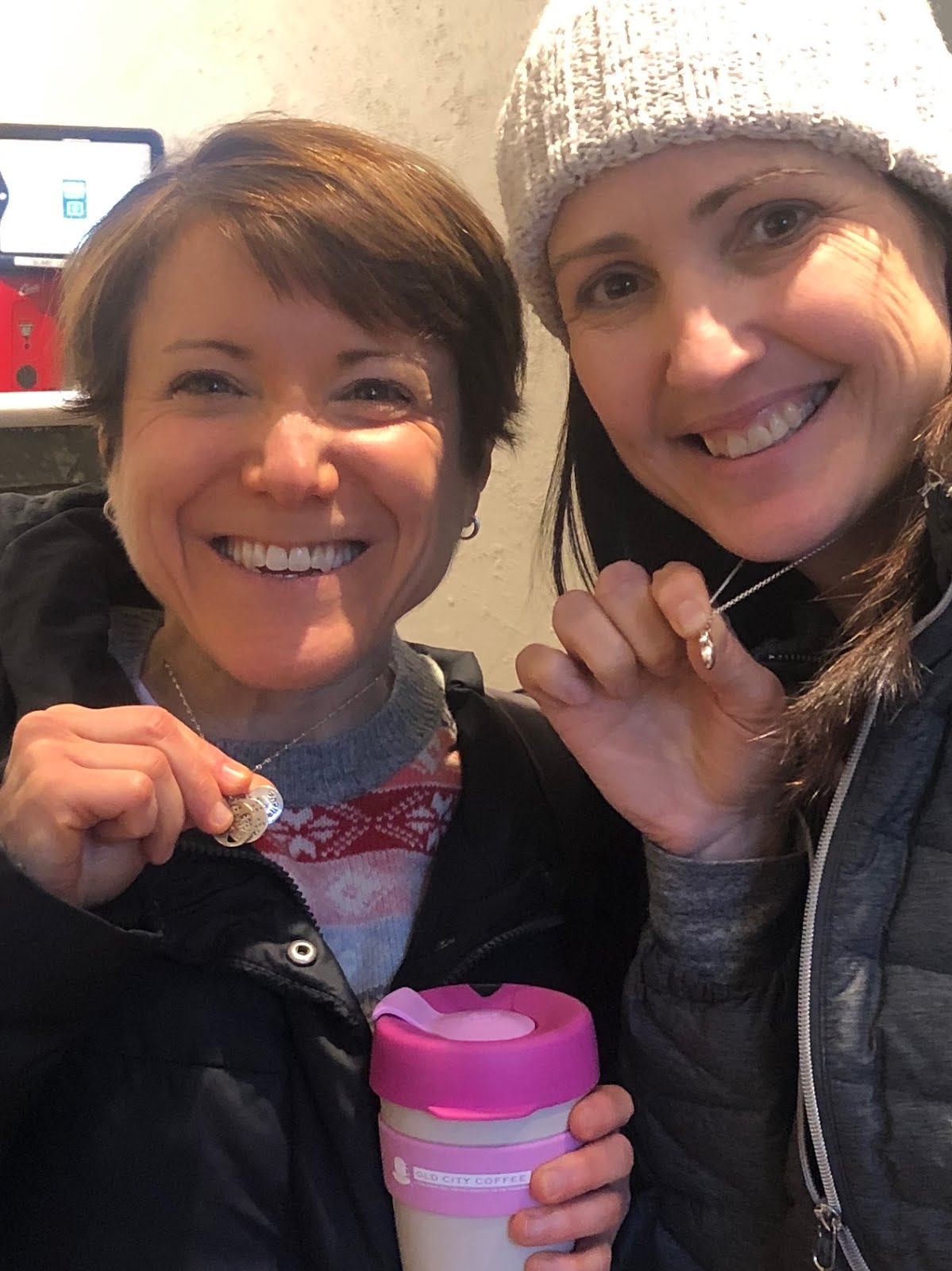 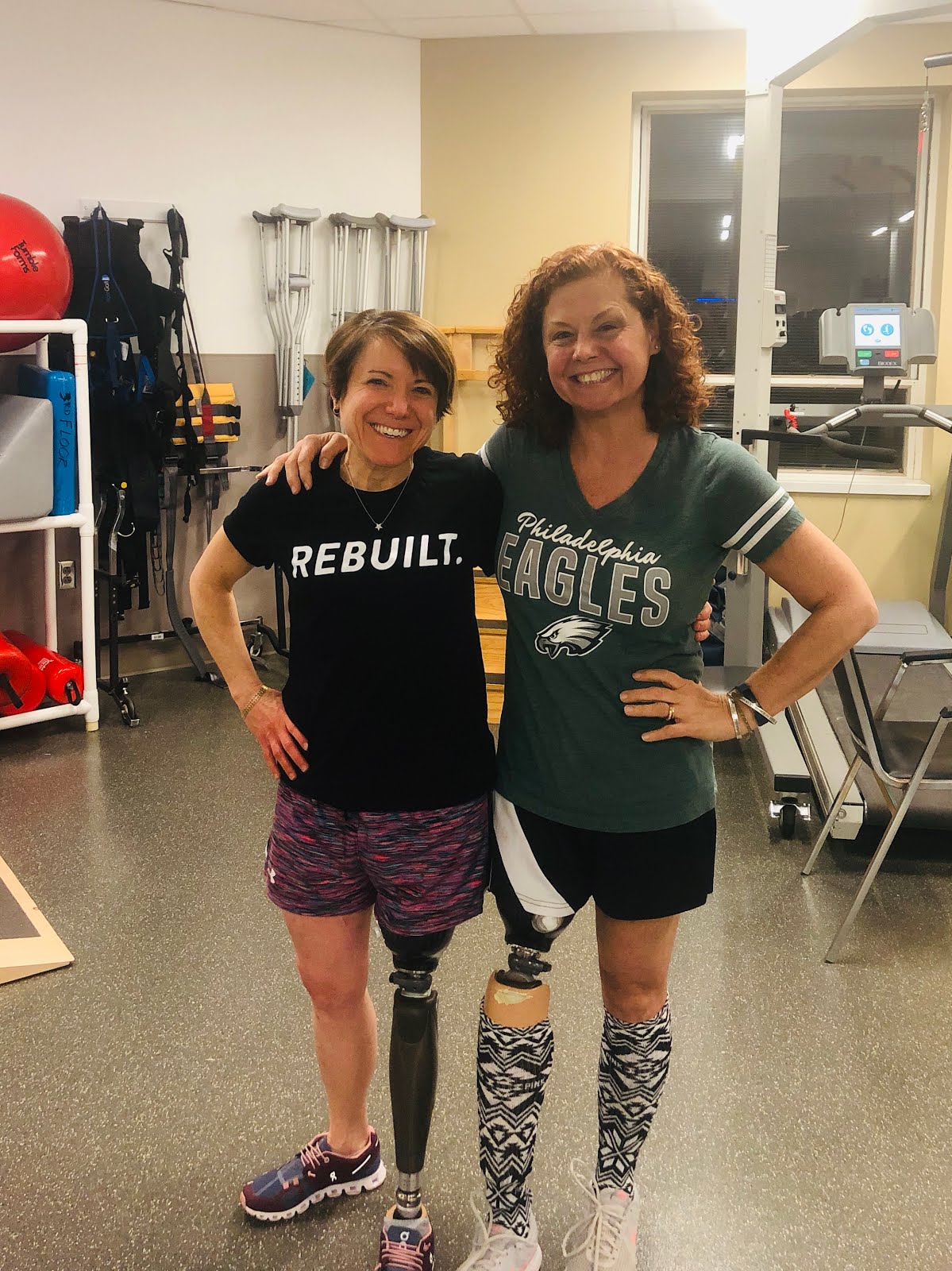